"I don't regret a single record that I have bought; I regret the ones I did not buy!"
Hem » Up-North Hardcore » The 20 most essential hardcore releases in the Nordic countries 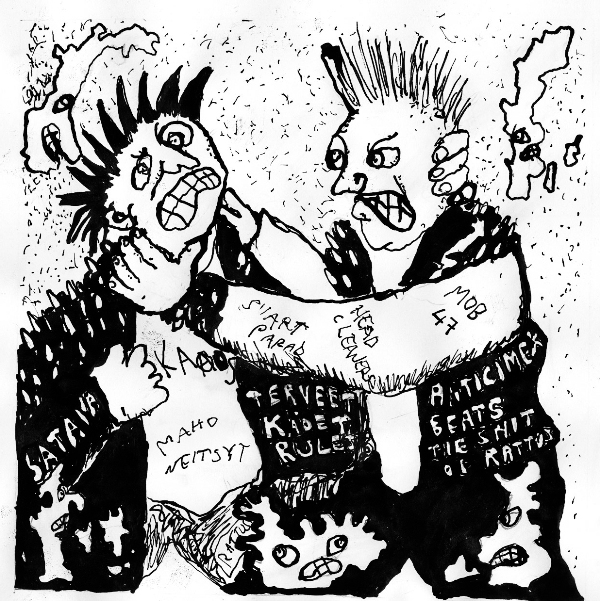 We’ve compiled a list of what we consider the best and the most essential hardcore records before 1986 from the five Northern European countries; Sweden, Denmark, Norway, Finland and Iceland. A lot of punks will no doubt criticise our list on the basis that it is against punk ethos to categorise records like this. As the Nordic proverb has it: “When the devil gets old he becomes religious”.

However this list is not an attempt to idolise bands or records, rather in doing this we’re paying respect to twenty early Nordic hardcore bands that we believe have acted as spearheads for the Nordic hardcore scene. We think that these bands have influenced our way of thinking by setting the musical, political and cultural footprints, and in no small part helped to ensure that the hardcore scene carried on for more than three decades.

Despite the geographical proximities between Denmark, Iceland, Norway, Sweden and Finland, “Nordic Hardcore” was never a coherent scene. Five different countries with five different languages, there were five different and largely separate hardcore scenes. While Nordic hardcore bands were primarily influenced by punk and hardcore from the UK and USA, local and regional influences were just as important.
At a regional level, the five Nordic countries shared a broadly homogenous culture, with similar politics and value systems. The established norm was the collective and patriarchal society. Hardcore punk with its grounded, perceptive and individualistic ethos was on a collision course with Nordic society, which had failed to embrace individual thinking and had failed to address world problems.

It’s hard to pick 20 records in a just and fair way to represent the early years of Nordic Hardcore before 1986. We could have easily picked another 20 records that are just as awesome and important. There were so many bands and so many records in the first period of Nordic hardcore. In short, the scene had a lot to offer. But here are 20 bands, 20 records and 20 writers, sharing their thoughts on what some of these records meant to them.

It’s very, very difficult to make a list of the 20 most essential hardcore releases in the Nordic countries before 1986 in a fair and just way while at the same time not falling into the trap of nostalgia. There were so many great bands out there and back then. The authors of this article would also like to recognise the following artists, which did not make the final list, but which were very close seconds, among with several other great Nordic hardcore bands: Siste Dagers Helevete (Norway), Moderat Likvidation, Asocial, Crude SS, Avskum, Rövsvett and Krunch (all Sweden), Varaus, Bastards, Pohjasakka, Unicef, Sekunda (all Finland), just to mention a few.

We would also take the opportunity to thank all the writers but also Vote Vasko, Stuart Schrader, Patrick Toole and Markku Hirvelä for valuable input. Tony Gunnarsson deserves a lot of credit for all proofreading. Finally I, the editor, would like to thank Florian Helmchensson who on regular basis ensured that we were not sitting comfortable upon any high horses.

All rips and images are from the Editor’s collection, expect where other sources are mentioned.

Back to the top.