"I don't regret a single record that I have bought; I regret the ones I did not buy!"
Hem » Vinyl & Tapes » Other Stuff » Interview with Helena Johnson, editor of DIY Fanzine Banan

The first issue of the long-standing fanzine Banan left the xerox machine in June 1985. After 9 thick issues Helena Johnson published the last issue in September 1989. Most Swedish DIY fanzine made maximum three issues using the standard questions like “What you think about skinheads?, what do you think about Discharge? Banan made more interesting interviews with band but also and cultural and political analyses compared to other. With typical 60 + pages it focussed both in Swedish and international contemporary bands mixed with scene reports, articles on animal rights and topics that Helena found important. 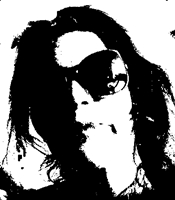 It was always easy for me to write, I not sure where the skills came from – Banan was actually my first and only fanzine, says Helena today.

Helena says: Making a fanzine gave me the possibility to develop my creative side and also my thoughts on the society at the time. Obviously I also had a genuine interest in punk and hardcore music.

Helena started strong with a 76 pages issue in 1985 interviewing bands like Asta Kask, Disarm and Sötlimpa. Living in Åkersberga (north-east of Stockholm) at the time, but with her roots in Falun, she also made a bunch of scene reports from the region.

The main tools to make the zines was a typewriter, a pair of scissors, glue and tape. The first two issues I actually xeroxed my self but since I made about 300 copies of each issue I got help from a printing company as from the third issue. For fanzines the general most interviews was made either by letter or at concerts and it was the same for me, Helena says.

With her charm and positive attitude there was not any major problem to makings interviews. Helena : I remember that my first interview was with Disarm from Gothenburg, they returned the reply by mail quickly. I was also quite satisfied by interviewing bands like Rick Kids on LSD and Potential Threat.

In general all fanzine have a tendency to write positive about the scene, which is quite obviously as the word fanzine is a combination of the words “fan” and magazine. In the punk community most people knew each other, at least within a region. There was no difference between bands, audience, tape labels or editor of fanzines. We were all part the same community, says Helena. 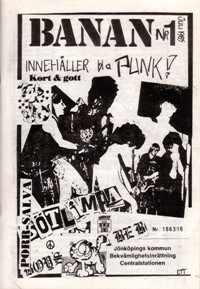 The local scene with their shows and bands brought punks together – the fanzine and the small labels played a role bringing the Swedish community together. Helena :I truly believe the fanzines made a difference as fanzines where connecting various parts of Sweden with the fans, all from bands, labels and concerts. No-one else were where really writing about it, maybe except press items in the local newspaper.

Asking Staffan at Really Fast (a label that released shitload of swedish punk records) about fanzines in general and Banan specifically his reflections are: Yeah – I remember Banan, it was a fanzine with unlimited energy, curiosity, joy and kick ass attitude. Filled with thought and feeling it made great interviews. It was quite a unique fanzine that I was reading with great proceeds. I believe that the zines here in Sweden was important to spread knowledge about bands, records and tapes but also other zines. I was really interested and inquisitive and tried to get my hands on all fanzines available. Today the zines are a treasure of fact and cultural expressions at the time. In those days it all was really one thing and everyone: bands, labels, zines and audience; contributed to the scene. The history leads to scene today. By the way, Banan is a zine I occasionally read even today.

Most of Helenas’ zines was sold at concerts and to friends in the local punk community. A few was sold through mail order and of course she traded zines with others in Sweden. Helena : You got to remember that this was before internet, e-mail and cellphones so distribution was obviously quite physical. At the time I made fanzines there was a lot of good fanzines around like Skottkärrans ande, Livsfarligt vatten, Profitblaskan, Fight Back, Ayatollah and Fetvadd. I never saw it as we competed with each other, rather we shared articles. Of course there were fanzine reviews but we were quite nice to each other.

When asked how Helena remember being a woman in a scene which at the time was quite men dominated she says: Well – there was a lot of guys, at least in the bands. I made the fanzine at time when the first girls bands started to play more serious. The concerts was attended and managed both by girls and boys, at least in major cities. I did not see any issued blending in. In the end many punks share the same beliefs. That is that everyone is equal, men & women and in my case animals as well.

The last issue of Banan came out in the end of 1989 and is actually a co-operation with another fanzine – Skottkärrans ande: At lot of stuff happened in my life at that time and I moved back to the Dalarna region. Eventually I got kids and all that. The end of 80’s was an amazing time, I would not have been without it. I been away from the scene for a while, I believe we made great things but looking at the scene today it still seems healthy and vital Helena concludes

All nine issues of Banan are now available here at Swedishpunkfanzines .If you understand Swedish, enjoy!