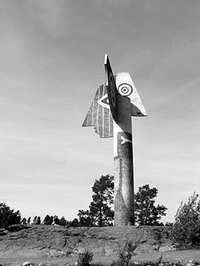 Image to the left: The Picasso statue in Kristinehamn, Sweden. Erected 1965.

There are a few cities in Sweden you have to keep an eye on to understand the dawn of Swedish punk. Stockholm, Gothenburg and Gävle are possible the most well-known. However, the small city of Kristinehamn (about 20,000 people) were lucky to have Sex Pistols playing at club Zebra on July 19th 1977. The event was the smallest gig on the Sex Pistols Scandinavian 1977 tour. The location was an old residence a bit outside the city. Steve Jones later referred to it as doing a gig in someone’s living room. Some 100 people showed up, very few of them looked as a punks. The reason was not strange really . There were no really punk bands around the city at the same time. However – the visit by Sex Pistols changed everything in the little city. You got to thank the club owner Bo Olsson for that. 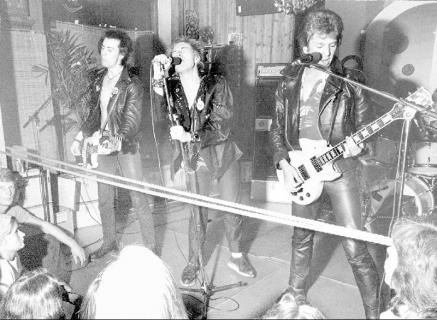 The first punk band from the city was The Bastards which transformed into Dirty Rats, The Ghetto and finally Skäms “Be Embarrassed”, in my humble opinion one of the best Swedish punk acts. Their 1979 EP is just a killer. Skäms broke up and the members moved into Kuggkrig “pillow-war” (Ulf Hedlund and Göran Vallinder) and Stefan Carlén moved on to Arabens Anus “the Anus of the Arab”. Krister Tångring started the fanzine Kramp but more importantly he and his fellow in crime, Magnus Pettersson, compiled two tapes which are posted here. Picassos Barn translates into the Children of Picasso, which refers to the punks of the city. This as the largest Picasso statue was erected here back in the mid 60’s

Jan ”Linda” Lindström, one of the members of Arabens Anus mentioned in an article in Värmlands Folkblad that the Kristinehamn punks had good contact with Anti-Cimex (at that time based in Mariestad). Anti-Cimex made regular visits to the city for gigs which influence the band to play harder. Avskum is a good example of that. Avskum had Stefan Carlén in the band and there were members both from Adrian Cuba (Håkan Tyresten) Dead Corruption. For those curious of all the bands in the city, Swedish blogger “Fabror Punk” once compiled a list of bands not mentioned above; The Afgans (around 1982) with Håkan Tyresten on bass, Allegori 2000 (post-punk), D.D.T (punk), Dropptortyr (one of Stefan Carlén’s early bands), GAZ (with Jan “Linda” Lindström), Erektion, Kukrunk, Louis Armstrong Big Band, Missfall, Prins Philips Cellstoff, U.P.A. All around 1978 – 1983. Not bad for such a little city. Worth mentioned is Slaskfittorna, a really weird punk band with lyrics with sexual content. One of the songs was called “She only wanted dicks. This band with Stefan Carlén on vocals actually but out a demo which has becomes a cult classic among collectors of “könsrock” as it called here. I guess the translations could be “sex-rock”. It’s all about masturbating and fucking sheep and cows.