If you ever been to Skänninge, Sweden, you will realize it an idyllic little city (3,000 inhabitants) on the fertile Östergötland plains. There are some nice stone buildings in 1900 century architecture and a small river cut the city in two parts with a nice park on both side. Despite the idyllic surroundings the kids were revolting and a bunch of punk bands emerged in the early 80s. More interesting, it was all documented as Really Fast released two compilation tapes (1982 and 1983)

I passed on a few questions to the poster child of the Skänninge-punk scene back then, Staffan Fagerberg and here is his story:

Image to the left: Patrik Jonsson of Really Fast in his “studio”.

Staffan: Skänninge punk vol.1 and 2 is the result of us realizing that there suddenly was many bands in the city and we thought they deserved a recording. Most of the stuff was recorded in the rehearsal studio, supervised by Patrik. He is a guy with a lot of patience and was able to solve of the issues with the recording. Eventually he added more and stuff and wow – we had a “studio”. He pulled cables to a toilet where he had a small mixing table. Some of the bands made direct to cassette recording using a mono tape recorder. From that we started to make compilation tapes. 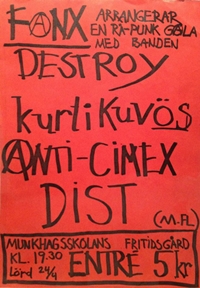 StaffanI’m not sure exactly how many copies we made, we made them as we got orders. I remember that some members of the bands did not buy them, they rather made their own copies. I would guess that we made some 20 copies of each, possible less of vol 1.

Q: Did the bands do gig locally?

Staffan: Well, as we now had recording and a “real” tape it became easier to spread the “gospel”. The compilation tape made it legit, so to speak. Gigs were arranged in different ways. Sometimes there were gigs in the rehearsal studio but once thee bands played at the school in Skänninge. I remembered that we also made gig during music class in school or at the local youth center. What we really wanted to do was to play in Linköping where there was real place for shows with much more audience.

Image to the left: X-traz on a talent-show in Vadstena in August 1981.

Q: But there was a lot going on in the region (Linköping, Mjölby, Tranås)?

Staffan: Yes, we had a good co-operation with the other cities in Östergötland, of course Linköping was the main city. It was for sure magic times – one got in contact with others junk because they wore a punk pin or beat-up jacket. In this way we started to understand more about punk, share information and ideas. We heard about punk bands in Boxholm, Tranås, Linköping. There should have been more bands in Motala, Mjölby and Vadstena. An important inspiration for us was Nasty Boys from Linköping (with Really Fast Patrik).Looking at the pure size it was a lot of stuff going on in little Skänninge, but we were a tight little gang so it was quite impossible to make an imprint in the city.

Q: Destroy is featured on vol 2, great band, can you tell some more about them?

Image to the left: Destroy from Skänninge.

Staffan: Ah, Destroy – what I can say is that saw them as they were struggling in Skänninge until they became a Linköping based band. In the later stage, several people moved in and out of the band. The band I played in Kurt I Kuvös shared rehearsal studio with them so I heard them play many, many times. We also did some gigs together, once with Anti-Cimex. Destroy should have recorded more stuff and got the chance to go to a “real studio”. With the expectation of KSMB, Destroy was the first band I had which has two regular singers. They were also the first band I heard that “tok-manglade” long before one started to talk about grind or one-beat. There were some weeks in the rehearsal studio when they encouraged one another to play faster and faster. It was not always so successful but there was a lot of energy in what they were doing. I would be cool if they could have done a decent recording of that, I believe that there are only some rehearsal tapes of it. This was in the early 80s, remember that. I also regret I never took any photographs of the line-up with Jouni on vocals, it did not last for long but he had the wildest hair of them all. Two spikes that looked like the devils horn, legendary….

Staffan also arranged the Fanx gigs. In the first one (see poster above) had Anti-Cimex on poster and of course Destroy and Kurt i Kuvös.

Staffan: We made two Fanx gigs, Anti-Cimex cancelled the first one, but Jonsson (vox) showed up for some partying anyhow. Of that reason we asked Anti-Cimex to play on the second Fanx-gig at Arbis in Linkoping in 1983. Some of that ended up on the Fanx Live – 1983. Fanx was a thing me and Biffen of Destroy worked on, it ended up with two gigs only. 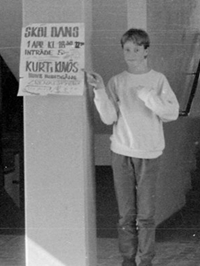 Image to the left: Staffan Fagerberg presenting a poster for the punk show in Skänninge on April 1st 1981. Kurt i Kuvös, Rune Rundgång and ZpenatZpyer played.

Of the bands from Skänninge, this site finds Kurt I Kuvös – translation “Curt in the Incubator” – the most interesting. Staffan Fagerberg (Drums) was only 13 years old when he formed the band together with his one year older brother Ola Fagerberg (Bas and Vocals) and a 14-year-old

On the Skänninge Punk vol 2 they contribute with six songs: Sovjet / Kapprustning / Svaren / Manipulationslåten / Tilltro and Lev & Njut. Unable to cut their own release they ended up on the Really Fast Vol 1 compilation (a label Staffan had together with Patrik from the band Nasty Boys) and the classic Raped Ass 1 comp tape (on Ägg & Tapes), both from 1983. They provided three songs to the Raped Ass comp and two songs for the Really Fast compilation. Eventually they made split ”Vårt Fria Land”with Huvudtvätt aka Headcleaners in 1984, released on Really Fast Records. As I like both bands it’s possible the best Swedish split ever.

Image to the left: Kurt I Kuvös at Rockers in January 1982.

Staffan: Yes right, the gig was at Rockers in Gothenburg. I can’t recall all the details, it was a long time ago. I have to say that Skitslickers leaped out most. Firstly the name of the band but secondly I have to mention Jimmie’s awesome mohawk. I thought it was decent “råpunk”. Today the band seems to be known all of the underground world Skitslickrs has got some kind of cult status. I took a really lousy picture with my Instamatic camera, I got it somewhere. I believe that Lars Sundestrand also had a really cool picture of them in one of the issues of Funtime.

Image to the left: Spotlicks.

Epilogue When Kurt i Kuvös called it a day in 1984 / 1984 it was a four-piece band with Patrik Jonsson added on the bas position. Staffan played with Gangster & his special revolvers in parallel with Kurt i Kuvös. In 1986 Staffan moved to Stockholm and was very much involved in the DIY underground, and still is. He played Stajnas Lobos until they called it a day. He is currently playing drums in Spotlicks, a band that have released three records. Ola moved on to Raped Teenagers. Thomas started to play with Baader-Meinhof already together with Biffen (the only permanent member of Destroy by the way) and Patrik Jonsson and Pinnen (both from Nasty Boys). He later moved to Stockholm to work with scenography in theaters. He is currently an architect..

The two Skänninge Punk tapes are available below. The first tape, vol 1, is somewhat interesting from a historical perspective whilst the second tape, vol 2, is just an awesome tape. X-Tras, Destroy and Kurt i Kuvös are just awesome. ProvRörsPojkarna is no my cup of tea. As with these old tapes, the recording quality was not great to start with and over time the tapes got bad. Nothing for the high-fidelity fans, but just the way I like it.